Over the past couple of decades, there has been a rather large health boom. This boom has brought about a large number of claims. Some of which have merit, while others are as legitimate as the witch hunt of the late 1600s. Therefore, I am beginning an article series, where I will shed some light on these flip flop topics. These articles will not only serve to educate you beyond that of the “special guest” fitness icon on your favorite morning show, but will  also grant me some practice in research and writing, as I come closer to beginning graduate school.

This claim has been made, debunked, made and debunked again. So it leaves one to wonder, does it or does it not?! Well, to give you straight up answer, no. Well, at least from a direct physiological standpoint, it does not. There have been no significant findings that eating breakfast directly burns fat. In fact, study after study has shown that meal timing has no significant difference on weight loss, all together. However, it has been shown that eating breakfast leads to a number of diet and exercise habits, that lead to greater weight loss and overall health/ well-being.

These benefits include, but are not limited to: 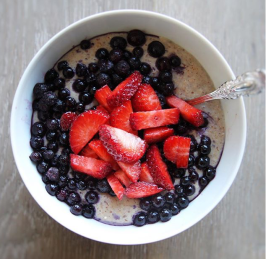 Yes! This is the MAIN point you should take from this article. When it comes to breakfast, the health benefits far outweigh the weight loss benefits. After all, being healthy involves more than how much fat you have. This is something you should consciously remind yourself of when starting a healthier lifestyle. All to often, people have this mindset that the number on the scale is the most important thing. This could be farther from the truth. In fact, research has shown that it is healthier to be overweight and fit, than it is to be a desired weight, and unfit.

It has been shown that breakfast can lead to:

What Type of Breakfast Should I eat?

The answer to this question highly depends on your morning activities.

If you workout in the morning:

Note: Eat this meal 45-90 minutes before you exercise for optimum results.

If you don’t workout in the morning:

If you do not like eating breakfast, but you feel you should begin, there are two things I would suggest.

Does Skipping Breakfast Have any Benefits?

This is where things get interesting. Note: if you are not a serious weightlifter or athlete, then this does not apply to you. Ever heard of intermittent fasting? How about Carb-Back loading? If not, let me briefly describe their principles. Both of these, despite their differences, aim to do the same thing- use insulin response properties to increase muscle/strength and lose fat.

Normal insulin pulls carbs into muscle from the bloodstream, however, it also stores fat. Notice I said “normal insulin”, this refers to the biological rhythm. The activation of this insulin is most sensitive upon waking (causing more fat storage). Which is why diets are always asking you to refrain from eating until later in the day. There is also “not normal insulin”, which is the insulin initiated through muscular activation (ex. working out). This muscle activation must be at a certain level, which is usually reached through vigorous weight lifting. Also, this works best if the lifting is done at 5pm or later. I would not suggest this style for someone who works out in the morning.

If this is something you are interested in, then keep an eye out for an article I will be writing very soon on this type of dieting.

3 thoughts on “Does Eating Breakfast Help You Lose Weight?”